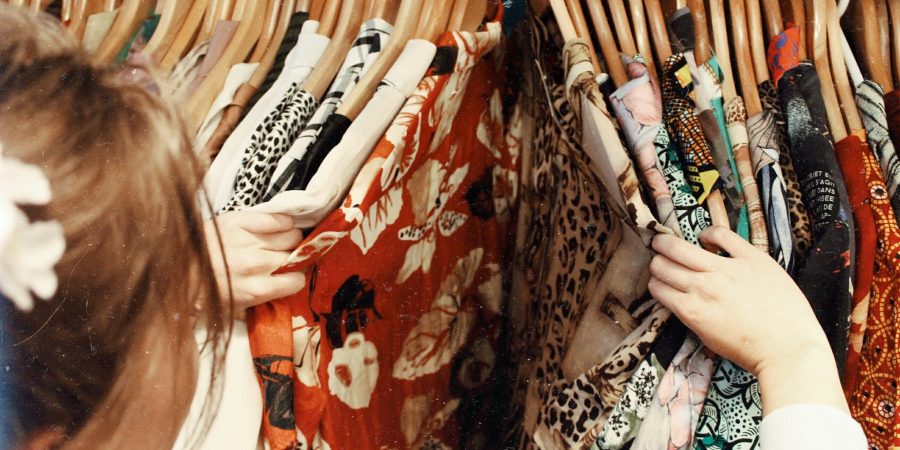 I can’t count the number of times I felt terrified packing up all of my things and preparing to close this wild, crazy chapter that made up the last five years of my life. I was a 22-year old college graduate when I moved just outside of Washington, D.C. in search of full-time work and adventure. I ended up finding both of those and so much more.

For some reason it hit me most while I was surrounded by all my clothes. With each item, I made a decision to keep, sell on Poshmark, or donate based on any number of criteria. Do you wear it? When was the last time you wore it? Does it fit? Does it scream FLORIDA? How will it fit into your new lifestyle? And somehow, many of my decisions came by answering one simple question…

Does this article of clothing belong in your new chapter or should you leave it behind?

With that simple question in mind, I ended up selling about 10 name-brand pieces and donating 97 articles of clothing ranging from blouses, pants, dresses, and shoes. As I stared at them spread haphazardly across the bed, all I could think was how I was selling and donating nearly all of my past to other women… To the young party girl who needs the perfect pair of 5-inch heels, she’ll get a show-stopping peep-toe pair. Little will she know, those heels went out in the rain one night and as I bravely drunkenly crossed the damp grass, they sunk five inches down into the earth with every step I took. My roommate at the time can attest to how hysterical this sight was! But don’t worry, the heels cleaned up real nice!

To the young woman applying for her first job post-college, who finally lands her first interview… she’ll end up with a pair of pants [that I never wore again], a black blazer with just enough structure, and a beautiful magenta top for a pop of color. I have no doubt she’ll walk into – and out of – that interview with show-stopping confidence.

To that same young woman who gets offered that job, perhaps she’ll also find the countless business casual blouses and pants that my sister picked out when we went to the outlets together in Williamsburg, VA. My sister was such a blessing during that time, when all my wardrobe consisted of was banded one-shoulder dresses, leggings, and low-cut blouses.

To another young professional, she might find herself in the wrap-dress that I wore when suddenly I was the one who was hiring young hopefuls interviewing for their first “real-world” job.

To a young woman still “feeling 22”, who was captivated, or maybe “enchanted” (as Taylor Swift would say), the first time she saw her handsome coworker… she’ll get a silky pink button-up that I wore the night I got too drunk to drive home after a happy-hour. I spent that entire evening inconspicuously holding hands with him underneath the booth and then later kissing him like I might never get the chance to kiss a man again. Over the next three years I spent falling for him, I used to wear that shirt, wondering if he remembered it as the shirt I was wearing that first night. And then, when it all ended for good, I never wore it again… yet, couldn’t bring myself to get rid of it.

To another woman, maybe she’ll get just as many compliments on that $4.99 top I found while browsing through TJ Maxx or the top from New York and Company that my grandmother always loved so much.

To other women, they’ll get so many outfits I bought and never wore.

One girl will get a purple shirt that I wore in Baltimore, MD, when my friend Chloe and I got hammered off fireball. It was -10 degrees outside, so I made out with a bouncer in order to skip the line and then was later kicked out of the same bar wearing that short-sleeved purple top. My girl Chlo came out to bear the cold with me, before begging the bouncer to let us inside while we waited for an Uber. The next morning, she realized she left her phone in said Uber. I tweeted about it and @’d her. A notification that I had mentioned her in a tweet came up on her lock-screen, because soon after, the son of the Uber driver was tweeting at me that his mom had my friend’s phone. To the girl who gets this purple shirt, prepare for some WILD freakin’ nights.

To the DC native or transplant… that NATS shirt has seen so many ball games and ended up on the jumbo-tron multiple times. One night, I was even recognized on the metro after the game as the girl who had been “twerkin’ on the jumbo-tron” earlier.

To someone who, like me, has a closet full of clothes but can never find anything that looks good, “Old Faithful” will always have your back.

I swear… every single item had a memory attached to it.

I can only hope that all of those clothes find a new home with some young woman looking for her first job or just hired at her first job. I hope that they give her confidence and that she feels like the boss she is and will be. Meanwhile, I hope the reliable outfits bring someone comfort and stability in their hectic world.

I hope the “fun” outfits make their way to someone else who is just as wild and untamed as me, or even someone who wants to come out of their shell a little bit… someone who is interested in good times with friends, not waiting in long-lines at the club, and nights spent sweating their face off on the dance-floor… and then shivering out in the bitter cold after the bouncer decided that trying to climb on stage to play the live band’s drums was completely unacceptable. ……..It was. Haha!

I hope the pink button-up I was wearing the first only time I broke my cardinal rule of not mixing business and pleasure makes it way to a woman and somehow teaches her that it is perfectly okay to love that special person in her life… but, at the same time, she needs to recognize when he/she is not loving her in the way she deserves. Rock that silky pink blouse with someone a bit more deserving, sis! Maybe someone who comments every time you wear it: “This is what you were wearing the first night…”

As for me… I’ll just be over here unpacking the handful of outfits that I decided to carry with me into my next chapter… the top I was wearing when I met my current boyfriend and the outfits I wore on our first, and our second, dates. And the oversized denim shirt he gave to me. All of my amazing Stitch Fix tops, dresses, and jewelry. The amazing dresses that my girl Ashley gave to me before I left that will undoubtedly motivate me to get back in the gym.

I am so excited to be starting this new chapter. Sure, there have been plenty of times I felt terrified, and even sad, to be letting go of all of these clothes, because I associated them with all the memories. But that’s when I remembered two things:

I encourage you to remember those two things when you find yourself letting go of pieces of your past and embracing a new chapter and new beginning. In the meantime, stay with me — so many amazing melodies to come!

4 thoughts on “Memories Cannot Be Sold or Donated”