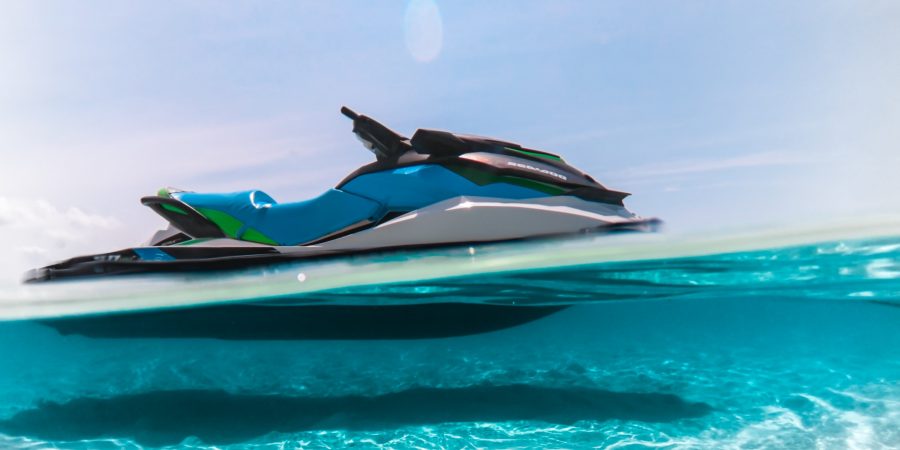 Many people back home have been asking me about my life down here in Destin. The way that I have summed it up to most: “Work is great, but the sunsets are better.” One of the best parts is, without a doubt, the 13 minute round-trip commute. Compare that with my 1+ hour round-trip commute in the DC area… and I mean, what else is there to compare?

I’m back to working out and eating right. I feel no stress. I don’t cry in my car before dragging myself inside to work. I have more time to devote to me. And this past weekend, I got to enjoy beautiful sunshine and 70 degree weather while home endured ice and snow storms.

I had been pumped to ride the jet skis since before I even moved down here. I had never ridden one before, but I’ve always been a thrill seeker… roller coasters, sky diving, etc.

This weekend was the first where the weather was warm and sunny, so, Alex and I set off to launch her jet ski around 11:20. I was getting anxious because the marina was slacking and we didn’t get to take off until afternoon. After all that waiting, I was more than ready for the rush of adrenaline I knew I’d experience as we took off in the bay!

Only… Alex’s jet ski wasn’t working. We were maxing out at 10 mph… for over 30 minutes. Picture Harry and Lloyd from Dumb and Dumber, traveling at 15 mph on a moped to Aspen, Colorado. We were the only people out on the water, and rightfully so. It was warm, but not that warm. It was all so comical… like we were out for a Saturday cruise just puttering along. We tried troubleshooting… almost like a computer. Turning it off and back on. Tried putting into reverse. Pressed all the possible buttons. You name it, we tried it. No luck. I couldn’t stop laughing at how anti-climactic my first ride on a jet-ski was. Meanwhile, Alex was sure to inform me when, “OOH! We got to 11 mph!”

We were supposed to be meeting our friends Lizzie and Brandt on their jet skis, so Alex called them, on her brand new Samsung Watch, to let them know the situation. Neither of them picked up, but roughly ten minutes later, Lizzie called back and let us know they were on our way to us. She reportedly told Brandt, “They’re slow… but not this slow.”

While we continued to crawl, I saw them come darting around the corner to the rescue. Brandt read the error message/code and was able to determine what was wrong, but it meant flipping the jet ski… which meant we all had to get in the water.

After weeks of a cold front and this being the first 70 degree day, the water was freezing. Thankfully we were only waist-deep. Once Brandt was able to fix the issue, we were ready to continue on our way to Navarre, about 25 miles away. But before we left, Lizzie insisted that I had to go through initiation, which was riding Brandt’s jet ski with him. I didn’t really know what this meant, but I’ve never known initiation to be a good thing.

I looked at him sternly, “Brandt, if you throw me off this thing, I’ll fucking kill you.”

He explained, “I won’t, because if you get thrown off, I’m going in with you and I have no interest in that today.”

Well, he surely made up for my 10 mph bust of a first ride. His supercharged jet ski took us from 0 to 78 mph (max speed) in what felt like five seconds. I believe the actual specs of his jet ski state that you go from 0 to 30 mph in two seconds. I held onto his life jacket with a death grip because all I could picture was me flying off the back of this jet ski and dying immediately on impact.

The rush was amazing, but I didn’t want to do it again. But oh, did we do it again… when we returned to Alex and Lizzie, he said, “Hey, you see that jet ski?” I looked across the water and confirmed, and within two seconds we were off again, racing the other jet ski. “WHYYY?!” I screamed.

Eventually, I all but insisted that I be allowed to get back on Alex’s jet ski so that Brandt could “have his fun” and I could avoid death. We made it to Navarre and spent some time with Alex’s dad, Donnie, at his beach house. Not a lot of time, because between Alex’s marina being late with the launch, our 10 mph ride, fixing the jet ski, my initiation, etc… we were behind schedule and running out of daylight.

I ended up putting on a long-sleeve Under Armour in hopes of staying warm as the temperature dropped and Alex borrowed a sweatshirt and sweat-pants from her dad. Brandt, of course, had to warn us, “When you flip and are soaking wet, you will be wishing you weren’t in all those clothes.”

Well, not even 5 minutes into our trip, Alex’s jet ski started beeping obnoxiously and reporting a different code. In the process of getting close enough to Brandt so he could look at it, Alex turned the jet ski too sharply… and flip, we did!

Now, for those of you that know me… you know that I love to swim and I even worked at a pool throughout high school and college. But I kid you not, when I entered that water and was fully submerged… it cut right through me like a thousand knives. I came up flailing like a drowning cat:

The only difference between me and that cat is I didn’t get back out as quickly because Alex was moving at the speed of smell getting back up on the jet ski, while Lizzie yelled, “Alex… HURRY! Melanie is cold!”

You can imagine how cold we were in all those clothes and you can also imagine how Brandt loved boasting about how he was right.

I wish I could say that that was the last time Alex’s jet ski malfunctioned, but it wasn’t. Brandt ended up having to ride it back and trailer it. For all the trouble, Alex treated us all to dinner. She and I had stopped by our place to grab her wallet and she changed into dry clothes. I didn’t want to get out of the toasty car because I was still defrosting.

When we got the restaurant, my teeth were chattering and my body was convulsing… so I decided that I had no choice but to buy a $40 long-sleeve shirt from the uber-touristy gift shop. The lady behind the counter showed me to the dressing room and I took off the Under Armour and my bathing suit, put on shorts and my new shirt.

I took one look at myself in the mirror and immediately realized that I now had to cross through the entire restaurant, full of children and families, looking like Jennifer Aniston from Friends. I’m including a picture for those of you who are not following the reference: I returned to the table and informed Alex and the gang that until Alex’s jet ski is fixed, I can safely say that was my first and last time riding the jet skis to Donnie’s! When dessert arrived (some type of pie made from Krispy Kreme donuts), I tried to get a photo, but Brandt decided to be an ass and throw his spoon on it before I could get a picture for the blog. I could only get so mad, he had saved the day multiple times.

Meanwhile, Lizzie realized there were walnuts in it and told us she was allergic. When asked how allergic… she said so seriously: “Well, I’ve never died from eating them.”

YOU DON’T SAY, ELIZABETH! You don’t say! Now when people ask how life is down here, I’ll probably say:

“The livin’s easy, but the laughs are better.”