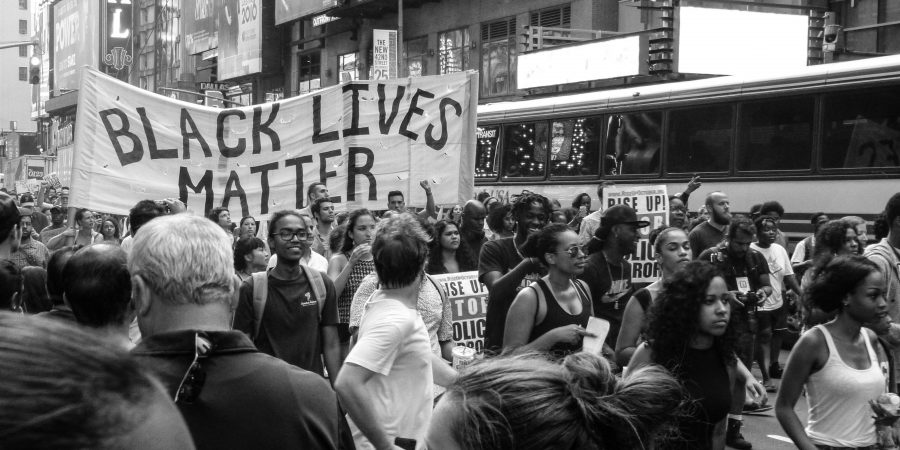 Let me preface this blog by saying… it has taken me too long to find words. And I’m still not sure these are the right ones. I woke up this morning to The President of the UNITED States tweeting: “when the looting starts, the shooting starts.” And I immediately felt that my words here on this tiny platform couldn’t possibly do any good. Hopeless. But, it is that exact line of thinking that allows this inhumanity to continue.

Silence is not an option. And in that same breath. White people… these words below are no longer enough. In fact, they never were.

“Some of my best friends are black.”
“I voted for Obama!”
“Michael Jordan is my favorite athlete.”
“I can rap every lyric to every Lil’ Wayne song.”
“I don’t see color.”

Inherently, “I’m not a racist” is a white person’s way of absolving themselves of any responsibility for the inhumane injustices faced, in the past and present, by people of color.

I am here to tell any white person who has spoken, typed, or thought these words… it does not matter that you are not racist, nor does it matter that you think you have support to back your claim. [News Flash: None of those supporting statements mean you are not a racist.] More importantly, your self-defense has no place in the conversations happening this week, or ever in conversations about race.

You are not being hunted and killed in our streets because of the color of your skin. You are not begging to breathe. You have nothing to defend… unless it is the lives of our brothers and sisters of color.

ENOUGH with the proclamations that only help YOU sleep at night and instead come to grips with this reality:

Racists live and breathe among us.
They choose to uphold an evil, a despicable sickness…
one that exists within our community.

It does not matter that you are not one. They exist. They look like you. And they look like me. And that’s a fucking bitch, ain’t it?

To know that you, personally, do not act, participate, believe, or operate in these unspeakable ways, yet, because of the color of your skin… you are grouped among them. And if you have ever said, “I’m not a racist, because X, Y, Z.” then deep down, you recognize this. It’s why you are so quick to want to remove yourself from such awful company.

Again, your self-defenses only alleviate your own discomfort, and they allow you to simply turn a blind eye, stick your head in the sand, and ignore what’s STILL happening above ground.

Right now, there is an entire community mourning and grieving, over and over and over again, the murders of people who look like them, at the literal hands of people that look like you and me. They fear daily for their fathers, sons, mothers, daughters, spouses, friends, cousins, nephews, nieces, themselves… because the list of activities they can do safely gets exponentially smaller with each passing day. And yes, because the people who took an oath to “protect and serve” are executing them in unimaginable ways.

Except… we can imagine it, because there it is for us to watch on our social media feeds. Over and over. Like a never-ending series of horror films. Except, the real horror is that these are not movies with fictional plots and made-up characters.

This is the broken world we live in. These are real people. With beating hearts and full breaths that are being stolen in mere minutes and with absolutely no regard to the preciousness of either. With no regard to the soul that possesses them.

And your primary concern is making sure people know that you’re not a racist?

It has taken me all week to even draft this blog, or any commentary anywhere, sparked by the murder of George Floyd. I have seen the outcry from my friends of color… their utter exhaustion, their weariness, their grieving, their inability to attempt to “teach” white folk any longer.

As far as I’m concerned, people of color owe us NOTHING. They do not owe us praise for blogs like this, or social media posts showing support, or the like. They do not owe us peaceful protests, because when Kaep took a peaceful knee, much of the outrage was louder due to the alleged disrespect to a symbolic piece of fabric and the National Anthem than it was for human life. Kaep, and others who kneeled with him, were painted as unpatriotic villains, and as a result, so many missed the stories of the unheard victims he was kneeling on behalf of.

Frankly, people of color have given enough time and energy to fighting a fight, no, a fucking war of centuries… when the oppressors have never cared to hear their stories, to understand their experiences, or acknowledge the ways in which they have dictated the unfortunate realities of all minority groups. And yet, through it all, people of color have even given us a shining example of resiliency and perseverance, despite the endless hardships.

For as much as we have taken, used, and yes, exploited, it is time that we give. It is time to give our voices, our time, our energy, OUR PRIVILEGE, to help free people of color from this type of inhumanity instead of being so quick, so steadfast, so damn adamant that “I’m not a racist” is enough.

Please stop. What you must be, in this time, and forever moving forward is ANTI-racist. Anti. AGAINST. And it starts… with facing your white privilege.

Tim Wise, who was the first to teach me about my white privilege, by way of his book, White Like Me: Reflections on Race from a Privileged Son, said, “By allowing white America to remain in this bubble of unreality, white privilege ultimately distorts our vision, and makes it difficult for us to function as fully rational beings. It protects us from some of life’s cruelties, and allows us to wander around, largely oblivious to the fires that, for others, burn all around them.”

The bubble of unreality… it is ours to burst, my white friends. Start first by ending your commentary about how you are not a racist. It does not matter. Then, face and understand your privilege. My personal directive: go purchase Tim Wise’s book… buy as many copies as you can afford. One for yourself and gift the rest to your white friends. Then, challenge them to pass it along when they are done. And because you’ll need something to read while you wait on delivery of the book — read this Tim Wise article. And for things you can be doing right now: check out this article and take action.

The bottom line: educate yourself into action. I’ll be continuing to do so myself. Not being a racist, is simply not enough. If it were, we wouldn’t be here.

Nothing like ending a long day on the beach. #myha

"Flowers are the music of the ground. From Earth's

Never could have anticipated a simple statement ["

Gracing your timelines with this beauty as she cel

As many others are doing as we approach the close

Nothing like ending a long day on the beach. #myha

"Flowers are the music of the ground. From Earth's

Never could have anticipated a simple statement ["

Gracing your timelines with this beauty as she cel

As many others are doing as we approach the close